Natalie Portman, Nicole Kidman and LL Cool J rocked the red carpet for the 2011 Golden Globe Awards at the Beverly Hilton. Sure, the winners of the Golden Globes on this night included The Social Network, The Kids Are All Right and the cast of Glee, but overall — the spotlight shined on a living legend making his triumphant return, Michael Douglas. 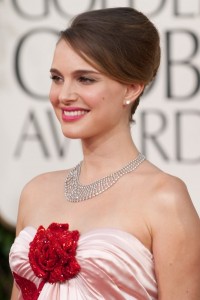 Natalie Portman was like a rose in Black Swan and perhaps sported one on the red carpet as she arrived for the 2011 Golden Globes that would conclude with her new label, no not mother — Golden Globe winner. “It’s such a gift to make a movie like this. It’s so rare now,” Portman said on the red carpet. “It was 10 years in the making. For 10 years, Darren and I talked about this movie and to finally make it was so incredible. And to have people respond in this way is even better.”

Congrats on the pregnancy are also in order for Portman. Looking radiant, she answered the proverbial red carpet question with effervescent class. Why this dress? “I just wanted to be comfortable. I still want to wear something beautiful — but obviously it has to be loose and flowy, which is wonderful,” she said and laughed.

Angelina Jolie and Brad Pitt were there and as they walked into the Beverly Hilton, Jolie was asked about getting gussied up for events and how that played at home. “My girls are always happy about me getting dressed up,” Angelina Jolie said and smiled.

Nicole Kidman and Keith Urban looked fabulous, begging the question: Does Keith influence what Nicole chooses to wear at these shindigs? “He chooses it all,” Kidman said as Urban broke into deep laughter. “He has nothing to do with it. He usually just says, ‘Looks pretty.'”

She turned to Keith and quickly said, “Right?”

Urban nodded his head and smiled. “He did give this dress a name. He calls it buttermilk,” Kidman said and laughed.

As LL Cool J arrived on the scene, the power of the Golden Globes came over him. “There’s a great energy. There’s a lot of passion,” LL Cool J said as he turned to his wife. “Cool J loves the red carpet. Cool J loves his wife. It gets no bigger than this.” 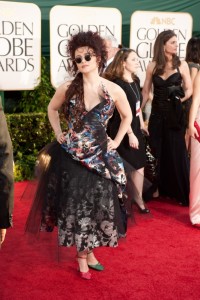 The King’s Speech’s Helena Bonham Carter famously sported different color shoes, one green and one red. We think that’s classic Carter and appreciate her for it. Others in the fashion world may have issues. But, regardless, the actress — who also starred in Harry Potter and the Deathly Hallows Part 1 and Alice in Wonderland in 2010 — was visibly moved by The King’s Speech nomination for Best Supporting Actress. “I’ve been around for a long time now,” Helena Bonham Carter said.

“It’s always great to be part of a film that people see. Frankly, nominations attract an audience. It’s just gratifying. The King’s Speech, people are really connecting with it, which is really gratifying and touching.”

Newlywed Carrie Underwood, nominee for best song, was simply pleased to be invited to the party. “I’m so honored and so excited. It’s a whole new world for me. I generally look confused on the carpet tonight because I am. This is just different than anything I’ve ever done before.”

One highlight of the Golden Globes evening in so many ways across the Beverly Hilton was when Chris Colfer won for Best Supporting Actor. His acceptance speech rocked those in attendance and millions across America. “I think I dropped my heart between Natalie Portman and Julianne Moore. So, if anyone sees that, please give it back to me. I can’t believe this,” Colfer said as Lea Michele practically wept. 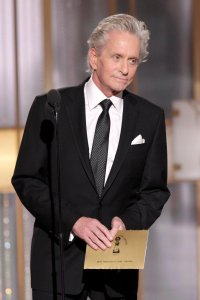 “I have to thank Ryan Murphy for basically being my fairy godfather. Most importantly, to all the amazing kids that watch our show and the kids that our show celebrates, who are constantly told no by the people and their environments — by bullies at school — that they can’t be who they are and can’t have what they want because of who they are, well screw that kids.”

The entire place erupted in applause. But, then again when it comes to the evening’s top moments on the red carpet and off, it’s hard to compete with a Hollywood legend that has beaten cancer and is making his triumphant return to his throne.

“There’s just got to be an easier way to get a standing ovation,” Michael Douglas said to the adoring crowd who stood for minutes to tribute the great actor.

“After you go through this, you have a greater appreciation of your fans. I feel good.”