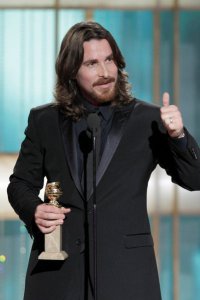 It’s wild, it’s unpredictable, it’s the 68th annual Golden Globes hosted by Ricky Gervais! It wouldn’t be a Ricky Gervais awards show without a beer on the podium! Ricky Gervais was on fire and no one takes cheap shots at Hollywood’s finest quite like him! Gervais’ sharp tongue immediately went after Charlie Sheen — but we expected that.

The Golden Globes celebrated the cream of the crop in movies and television and as always, the stars let loose with a night of drinks, fun and a few surprises, including a best actress win by Katey Sagal for Sons of Anarchy and a supporting actor win for Glee’s Chris Colfer.

Read on to see if your favorite stars took home a Golden Globe!

It was a tough race this year with The King’s Speech, The Fighter and The Social Network seeing many of its actors garnering Golden Globe nominee honors. The Fighter fought the good fight to take supporting acting trophies for Christian Bale and Melissa Leo. Colin Firth scored a win for Best Actor for The King’s Speech.

Always a class act, Annette Bening gave an exquisite speech as Best Actress in a Movie Comedy or Musical for her part in The Kids Are All Right, which also took home Best Comedy or Musical. On the animated side, the adorable Toy Story 3 took home Best Animated Film and get this — Justin Bieber gave the team their award! How cute is that?

Natalie Portman basked in the glow of being pregnant while accepting her Best Actress award for Black Swan, which lost to The Social Network for Best Motion Picture Drama. It truly was a Social kind of night. 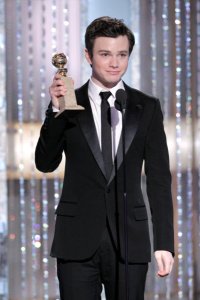 Glee star Chris Colfer looked about as shocked as we did when he picked up his first Golden Globe for Best Actor in a Supporting Role. Glee kept the night rolling as Jane Lynch once again reigned supreme in her role as Sue Sylvester with a Supporting Actress win and the show itself got top TV Series honors in the comedy category.

The ladies in the Television Drama category for Best Actress were all well-deserving, but years after she perfected the role of Peggy Bundy, Katey Sagal finally got her award for her work on Sons of Anarchy.

On the men’s side, Steve Buscemi picked up his first win as Best Actor in Boardwalk Empire. His show also won Best Television Drama. 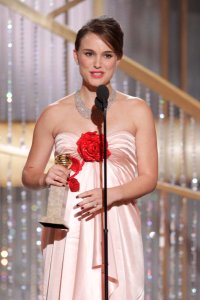