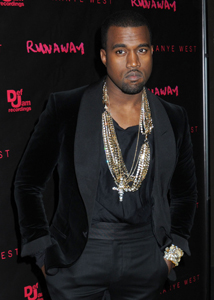 Kanye West thinks he’s a funny guy. Problem is, no one else does.

Recycling his ill-timed hijacking of Taylor Swift’s VMA acceptance speech, Kanye tried to steal the spotlight from Britney Spears in pretty much the exact same way.

On his Twitter page, Kanye wrote: “Yo Britney, I’m really happy for you and I’mma let you be #1, but me and Jay-Z single is one of the best songs of all time! LOL”

Britney Spears’ manager Adam Leber wasn’t amused and sarcastically tweeted back on her behalf, “Thanks for ‘letting’ us be #1. Much appreciated.”

Kanye got enough flack about the tweet that he did something nearly unheard of for him: He deleted it. In its place he wrote, “On a serious note I’m truly happy for @AvrilLavigne and @BritneySpears… No hate in 2011!”

“I thought LOL signified a joke… I didn’t get the 2011 LOL doesn’t signify a joke anymore memo… LOL or something else I guess.”

It’s only a joke if it’s funny, not if it’s a thinly-veiled bid for attention.