Keanu Reeves talks about Bill and Ted 3 — and how he is looking forward to hopefully reprising his role as Ted at the age of 46.

Would you buy into metalhead slackers Bill and Ted — at age 50? Keanu Reeves said he thinks Bill and Ted 3 could be the best adventure to date. 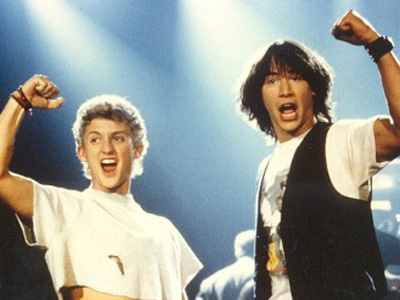 “It would just be us older guys playing the characters — we’d be older and it would be funny; they’re supposed to save the world and they’re turning 50,” he said in an interview.

Reeves, who has starred in The Matrix and is currently working on his latest film 47 Ronin, will reprise his role along with “Bill,” or British actor Alex Winters. Writers Chris Matheson and Ed Solomon are already working on the script.

Where will Bill and Ted go this time? “You know, I’ve spoken and had some meetings with the writers and Alex. I don’t really know any details of the plot — I know there’s a lot of time-travelling,” Reeves said.

“Chris and Ed, the writers, are doing a draft on spec. They’re taking it into their own hands and writing a script. I haven’t seen it yet.”

Reeves has been talking enthusiastically about a sequel to Bill and Ted for quite some time now — and it looks like it is on its way to happening. “We’ll see what they do. If it’s a film that can stand up on its own…and I’m meeting people now, they’ve shown the film to their kids,” he told MTV News. “We just seek to entertain, and if that could be something that could be worthwhile, on its own …”

Tell us: Would you watch Bill and Ted 3?

Read on for More Keanu Reeves