Alicia Silverstone is the latest celebrity to announce she is pregnant! What is in the water in Hollywood? 2011 is turning into a celebrity baby boom! 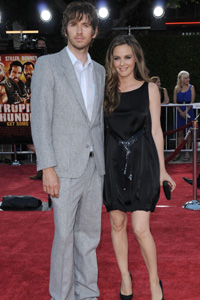 The Clueless actress married Jarecki, 40, after being together eight years and has been feeling her maternal instincts for quite some time.

“I’ve been wanting to have a baby since I was 2 years old — I’m destined to be a mother,” she said back in April, talking about playing a pregnant woman in the Broadway play Time Stands Still.

“Wearing a pregnancy suit was so much fun. I loved the feeling of pretending to be pregnant and having little arms and legs and this big belly. I can’t wait to be pregnant,” she confessed.

Alicia Silverstone gave a little hint she was pregnant, as she started tweeting info on being a vegan during pregnancy.

Apparently everyone in Hollywood stopped taking their birth control at the same time, as Silverstone is the latest in a long line of celebrity baby announcements the last few months.

Silverstone will keep busy in the next nine months, as she is the best-selling author of the vegan cookbook, The Kind Diet, and will be seen in the movies Vamps, Butter and Homework.