Broadway musical Spider-Man: Turn Off the Dark has been delayed for the third time to March 15, which makes this the record holder for the longest preview period of any Broadway production.

After four injuries and a recently announced delayed opening night (for the third time), many are starting to wonder if the musical Spider-Man: Turn Off the Dark is cursed. 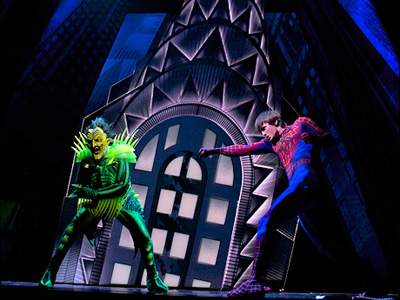 The $65 million musical began previews in November 2010, but producer Michael Cohl said they will move the official opening night to March 15. It was originally slated for December 21, 2010, and then moved to January 11, 2011.

“Spider-Man: Turn Off the Dark is ten-times more complicated to tech than anything else, and the preview schedule allows for only very limited rehearsal time (twelve hours per week),” Cohl said. “We simply need more time to fully execute the creative team’s vision before freezing the show. I picked a date in March that allows me to ensure that this will be the final postponement.”

The scheduled performances of Spider-Man: Turn Off the Dark for January 18 and January 25 have been canceled to give the cast and crew more time.

The action-filled show has been plagued with injuries. Natalie Mendoza, who was slated to play Arachne, has left the show after suffering a head injury. Other injuries included an actor breaking his foot and an aerialist breaking both wrists.

Spider-Man: Turn Off the Dark features new music and lyrics by Bono and the Edge and the production stars Reeve Carney as Peter Parker/Spider-Man, Next to Normal Tony nominee Jennifer Damiano as Mary Jane Watson and Patrick Page as Normal Osborn/the Green Goblin.

Take a peek behind the scenes at Spider-Man the musical: