Brandi Favre, younger sister of Minnesota Vikings quarterback Brett Favre, was arrested Wednesday in a drug bust. Read on to learn more about the latest incident for the scandal-prone NFL star.

Related story How to Sext With Total Confidence 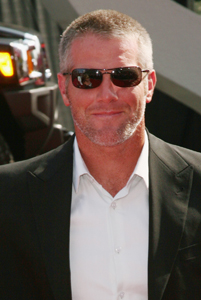 Just when Brett Favre thought the media scrutiny against him had died down, here comes word that his sister was busted for possession of Methamphetamines.

Brandi Favre, 34, was jailed on $40,000 bond Thursday for her part in a meth bust in Mississippi. She was allegedly one of five people found cooking the illegal drug in a Diamondhead, Miss. apartment.

The arrest is another incident in the female Favre’s long history with law enforcement. She was arrested for shoplifting in 1999 and for unlawful use of a weapon in 1996.

Though he’s not directly involved with his sister’s arrest, its likely Favre is unhappy with the situation. Favre’s Jenn Sterger sexting scandal —  along with his latest, and presumably last football season – puts the famous quarterback in constant tabloid focus.

Brandi Favre will go to trial on charges of manufacturing methamphetamine and generating hazardous waste. If convicted, she faces up to $1 million in fines and up to 30 years in prison for each charge, according to Sports Illustrated.