Arizona continues to try to win back Callie, who has some big news of her own. Teddy is saddled with some serious wifely duties. A new crop of residents shows up at Seattle Grace and the race for Chief Resident is back on during Grey’s Anatomy tonight!

After last week’s massive trauma on Grey’s Anatomy, Cristina (Sandra Oh) is finally back in the fold. The Chief (James Pickens, Jr.) wants to keep a close eye on her, but he hasn’t lost faith in her. It turns out she’s still a front runner for Chief Resident. 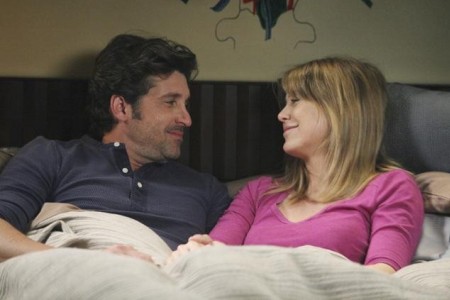 The senior residents are atwitter, each wanting the job for him or herself, so Cristina will have to show her kinder, gentler and more helpful side with the new crop of residents if she wants the title. That isn’t easy, considering how annoyingly dumb they seem.

And yes, there’s sure to be a looker in the group who is sure to shake things up in the romance department.

Speaking of romance, Arizona (Jessica Capshaw) is determined to get her ex back. She looks to Mark (Eric Dane) for advice on how to win Callie (Sara Ramirez) over, but Callie isn’t interested, to put it mildly. She is less than thrilled when Arizona buys out their subletters and moves back in.

“I don’t want to see you,” Callie growls. “This isn’t a ploy. I’m not pouting. I don’t want you in my life. Get your crap out of my apartment!”

Callie, who is handling a gay wedding disaster at the hospital, also has some big news of her own. Could she be knocked up after her recent dalliance with Mark? Or will it be something professional?

Teddy (Kim Raver), meanwhile, tries to keep the lines clear with Henry (Scott Foley), reminding him that their marriage was just a ploy to get him insurance. When something goes wrong in surgery, however, the new missus is forced to make a key decision for him.

The drama starts tonight on Grey’s Anatomy, January 13 at 9 p.m. on ABC.