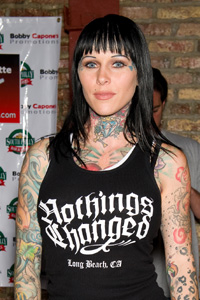 TMZ reports that Olson and McGee met at the Palms when they kissed onstage during a comedy show.

Charlie Sheen invited both of them back to his $40,000 per night Hugh Hefner Sky Villa inside the Fantasy Tower at the Palms (photo below!) and they showed up to his room around 2 a.m.

McGee reportedly encountered a “trainwreck inside” the hotel and only stayed a couple of hours.

“He was definitely in full party mode and it looked like a bomb had hit the suite,” the source continued. “There were empty bottles strewn all over and all manner of adult-related items left around, especially in the massage room and bedroom.” 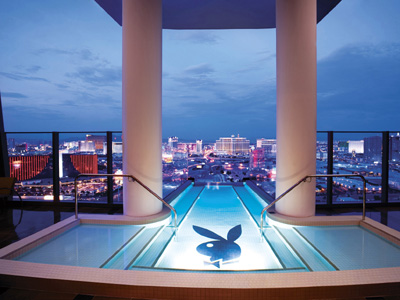 TMZ caught up with McGee and asked her about the weekend in Vegas with Charlie. “It was nice,” she said.

As far as the room? “Nice, but a little messy,” she revealed. Does she have any plans to party with Charlie in the future? “No, I don’t think so.”