John Travolta and Kelly Preston introduced their baby to the world on the cover of People. 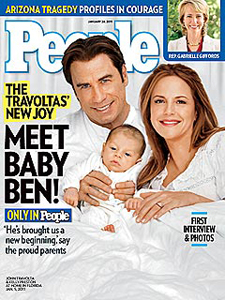 John Travolta and Kelly Preston have someone they would like you to meet: Their new baby Benjamin, born November 23, 2010.

While the sweet little thing looks like he couldn’t care less to have a coveted People cover, his mom and dad are positively beaming.

“He’s given the house a renewed spirit and purpose,” Travolta said.

The family tragically lost their son Jett in 2009 after the 16-year-old suffered a seizure in their Bahamas vacation home. Travolta and Preston later admitted that Jett was autistic, something their Scientology beliefs counter.

Travolta and Preston said the birth was a joyous, family affair: He held her hand during labor, and close family friend (and former Travolta costar) Kirstie Alley kept daughter Ella Bleu, 10, company in the waiting room.

What’s next for this family? It’s all about enjoying babyhood. The couple said their home is filled with lullabies — Travolta’s personal fave is A Buahel and a Peck from Guys and Dolls — and lots of bedtime stories.

read on for more john travolta