Nicole Kidman is finally talking about why she looks like her own wax figure at Madame Tussauds: She used Botox. 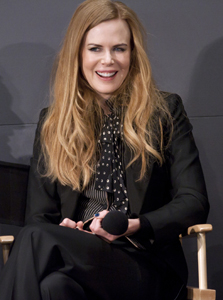 Nicole Kidman is the butt of many jokes because of her preternaturally smooth skin and nearly immobile forehead. Now the 43-year-old is telling us what we’ve known for eons but she’s long denied: Botox has been a bestie.

Kidman didn’t come completely out of the closet though. Although she admitted to using the beauty treatment in the past, she said she no longer does — but her face still tells a different story.

“I’ve tried a lot of things but apart from working out and a good diet most things don’t help,” she told a German magazine interviewer. “I even tried Botox but I didn’t like how my face looked afterwards. Now I don’t use it anymore — and I can move my forehead again. I am completely natural. I have nothing in my face or anything.”

Let’s get real. This woman does not have the face of a 43-year-old who is simply diligent about sunscreen. If she’s finally actually being honest about the Botox, then we’re guessing she substituted with dermal fillers — lots and lots of dermal fillers.

Kidman has long denied using any sort of injectables, despite the 2008 declaration of a cosmetic surgery expert that she was single-handedly giving the industry a bad name because of her obvious Botox abuse.