Holly Madison is finally breaking her silence on Hugh Hefner’s engagement to Crystal Harris — and it ain’t pretty. 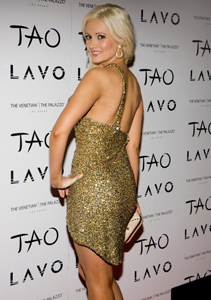 Holly Madison, who dated Hugh Hefner for years and was part of his trio of girlfriends featured on the hit show The Girls Next Door, is none too thrilled about Hefner’s engagement to 24-year-old Crystal Harris.

“I’d like to see Hef settle down,” Holly Madison told Life & Style. “I just want it to be with the right person, and I feel like he’s making a hasty decision. I’m not sure Crystal is the best thing for him.”

Holly says her biggest concern is that Hef doesn’t know Crystal well enough. Crystal moved into the Playboy mansion in January 2009, while Holly was Hef’s main girl for seven years.

“Crystal hasn’t been around very long — she’s a mysterious character,” Madison said. “No one knows much about her. Plus, she’s very young, probably too young to settle down. I’ve seen a lot of girls try to date Hef, and some have ulterior motives. I don’t think it would be a bad idea for him to get to know her a little better. I think it’s possible Crystal could break Hef’s heart. They could end up divorcing, and she could take half his money.”

Without an ironclad prenup, the money factor is a very valid concern: Hugh Hefner just bought back full control of the Playboy empire, fueling speculation that he is getting ready to turn operations over to his two sons.

Regardless, Holly insists her attitude is not brought on by the green-eyed monster. “I’m not jealous that he’d marry someone else. I just don’t want it to be a girl who’s using him to start her career,” she told Life & Style. “Basically, I think he could do better than Crystal.”

So is Holly genuinely concerned, or is this a case of sour grapes? Let’s just say that when Hef and Holly broke up, he said it was because she wanted marriage and kids and he didn’t.