Rooney Mara is making waves as the first images of her as Lisbeth Salander from The Girl With the Dragon Tattoo have arrived. 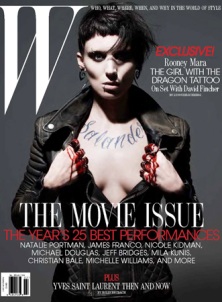 Rooney Mara showed off her new Dragon Tattoo look in a feature in W magazine. Where once fans of the Stieg Larsson book series only had fuzzy paparazzi photos of the cast — including Daniel Craig making the David Fincher film in Sweden — now Mara has come out with tattoos blazing in the latest W magazine.

After Mara scored the best breakup on film in 2010 in Fincher’s The Social Network, it looks like the director did not have to look too far to cast his heroine in The Girl With the Dragon Tattoo. Rooney Mara scored the role over many Hollywood heavies including Scarlett Johansson.

Fincher, Mara and Craig have been filming in Sweden for four months now and have managed to keep a pretty good veil of secrecy around the Hollywood attempt at bringing the Swedish sensation to life.

Mara told MTV News that before she delved into the book trilogy, she felt she didn’t have a chance to score the part. As soon as she finished Larsson’s books, Mara was game.

“I locked myself in a room for a week and read all three books, and decided I really wanted to be Lisbeth,” Rooney Mara said. “But I thought I had no shot at it.”

There are numerous scenes in the book (and in the Swedish version of the series) that Mara had to try to wrap her head around for filming. She knew they would be difficult, emotionally and physically. One includes a rape scene and another features the raping of her rapist by Salander, complete with the tattooing of “I am a rapist pig” on his abdomen.

Another aspect of taking the role that Mara had to embrace was the titular character’s vast tattoos and piercings. Swedish actress Noomi Rapace actually got all the piercings without the benefit of a makeup artist’s “faking” it.

Mara took the challenge as well and pierced her nose, eyebrow, lip and nipple. “I didn’t even have pierced ears. They put four holes in each ear, and, weirdly, that hurt the most. It was all very organized,” Mara said. “With David, everything is measured and carefully considered. He wants what he sees in his head.”