Muse frontman Matthew Bellamy is reportedly set to become a dad with girlfriend Kate Hudson. Will this shine an intense media spotlight on the ultra-popular band? 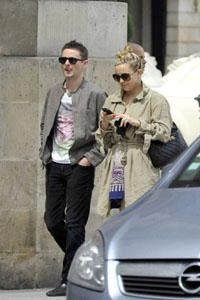 Muse frontman Matt Bellamy is making headlines — not for his music, but for the announcement that girlfriend Kate Hudson is pregnant.

“They couldn’t be more excited [about Kate Hudson’s pregnancy],” a source told People. “Kate is really happy. She was always excited to have kids again at some point.”

Bellamy and Hudson were first spotted together about nine months ago. Hudson spoke highly of Bellamy at the time, saying he was a “lovely” person.

“I do believe in love. I believe that when you really open yourself up to love, it’s the most beautiful thing,” Hudson said.

Hudson’s pregnancy will bring Bellamy a great deal of media scrutiny — he’s sold 10 million albums with Muse since the band formed in 1994, but he’s enjoyed relative anonymity outside of music. Even the spotlight of the Twilight series didn’t amp up Bellamy’s personal star power — author Stephenie Meyer credits Muse as the inspiration of the series.

Now? Bellamy will have to deal with the intense paparazzi scrutiny that Hudson deals with on a daily basis. Photographers have already followed the couple as they dined in California, spent the holidays in Aspen and met up with pals Bradley Cooper and Renee Zellweger in Paris.

We’re really happy for you, Matt! Just one request: Don’t slow down on making music. We need more Muse in our lives in 2011!