“I’m inspired by the new life here, and I love it,” raved Ryan Seacrest. “I don’t know what it’s like live yet, but it will, hopefully, be a little bit of a circus. Simon and I had our banter, and people knew us for that, but this is a whole different dynamic.” 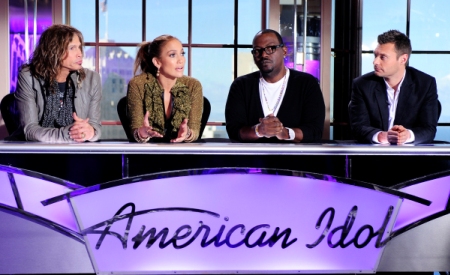 One key difference is that judges Jennifer Lopez, Steven Tyler and Randy Jackson are vetted musicians who have known each other and Seacrest for years, even though they’ve never shared the spotlight.

It creates a looser, more positive energy on the panel. In contrast to that infamously caustic Simon banter and mean-spirited judging, fans this season can expect light-hearted banter, the occasional burst of singing and even some Tyler and Lopez hugs for contestants who are also fans.

“They bring more of a critique, rather than just ‘Pack your suitcase. You’re going home,'” exec producer Nigel Lythgoe previewed. “I think they will say, ‘In order to stop you packing your suitcase to go home, this is what you should be looking at doing.'”

Those who love Lythgoe’s So You Think You Can Dance, which has always functioned that way, are sure to get the difference.

In addition to more supportive judging on American Idol, the contestants also have a few other new people in their corner. 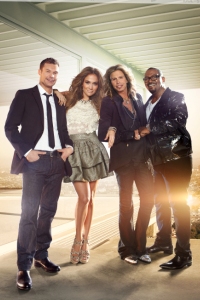 “Universal will be on the ground from the minute the show has hit, creating music and helping these artists reach their full potential,” outlined producer and Interscope-Geffen-A&M chairman Jimmy Iovine.

“They will be picking their own songs, but I help with coaching. If they’re going off in the wrong direction, I’m making sure they’re in the right key. We have about four or five great producers that are going to be helping them cut tracks, so everyone doesn’t sound the same every week.”

Season 10 on American Idol will also see some technological improvements in the voting system and the show’s “interactivity,” and Hollywood Week has been extended a week with new challenges, including a Beatles challenge in Las Vegas.

This year, when the live show launches and the viewing audience gets involved, the pool will already be whittled down to the Top 20.

Idol folks are hoping that will help us better bond with the contestants.

And the final difference? This is one stylish pair joining the panel, from JLo’s fashionista bend to Tyler’s rockin’ style.

“I change it up every single day in my own life: I can only be myself on the show,” Lopez said. “I’m not going to try to play it down or play it up or do anything. I’m a girl who likes to get dressed up, put on her jewelry and her lipstick and go. So that’s what you’ll get.”