How do you get those very important viewers to watch your show during February sweeps? Bring back Internet/music/teen sensation Justin Bieber. Yes, Bieber is back on CSI, reprising his role as troubled teen Jason McCann on February 17. Yes, we’ll wait while you set your DVR. 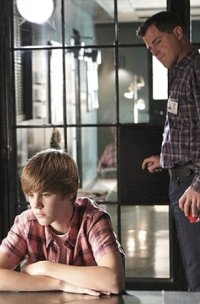 Can’t get enough Justin Bieber? Have you sent one of those death threats to Selena Gomez for locking lips with our Biebs? Well, we’ve got some news for you.

You’ll get two chances to see the wonderfulness that is Justin Bieber this February. His 3D biopic-concert film Never Say Never opens on February 11 and just six days later, the boy with the fantabulous bangs will reprise his role on another episode of CSI.

Justin (yes, we call him Justin…don’t be jealous) recently tweeted a picture of himself sporting a serious (makeup) shiner from the set. He said, “On set … where? Let’s just say I’m back to my evil ways. #badass.”

Last time we saw Bieber on CSI, he played teen Jason McCann, whose older brother had been killed at the end of the previous season. The cops suspected McCann of planting bombs to deal with his anger over his brother’s death. According to a tip from show regular Nick (George Eads), this time McCann might be in danger.

We hope that makes you feel better after hearing that Justin’s music, not the man himself, would be the star of an upcoming Glee episode. We live to serve. So, are you going to watch? Have you already bought your tickets to his film? Will you be camping out with your Justin Bieber pillow and sheet set? Let us know below. (And tell us where to buy those. We want some.)