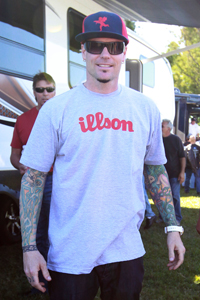 Rapper-turned-real estate flipper Vanilla Ice says he dumped Madonna back in the day because she was too much of a ho.

The unlikely duo dated in 1991, when Madonna was 33 and he was 24 and at the top of his music career. Vanilla Ice, whose real name is Robert Van Winkle, told News of the World via Digital Spy that while it was exciting to be with an older woman and that Madonna was a great lover, he felt totally betrayed when she published photos of him, along with her in compromising positions with other men, in her book Sex.

Perhaps he had never heard of Madonna before? It’s not like they met in church. She kinda already had a reputation.

These days Vanilla Ice is keeping himself busy with a couple of gigs, including the UK reality competition Dancing on Ice and his home renovation show The Vanilla Ice Project, showing his complete rehab of a South Florida mansion.