Tia Mowry and her husband, Cory Hardrict, are thrilled to be expecting their first child together. 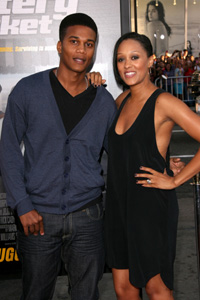 Mowry rose to fame in the 1990’s on the sitcom playing alongside her identical twin sister, Tamera Mowry. She can now be seen on BET’s The Game.

The couple, who married in 2008 in Santa Barbara, California, is excited to expand their family. “This is something that they’ve wanted for a long time and they’re thrilled,” a source says. “You can tell they’re really in love.”

Mowry will reportedly have cameras documenting her entire pregnancy for a TV show on the Style Network this year.

“We are both so excited to be parents,” the couple tells Us Magazine. “We have been wanting this a long time!”

Mowry is looking forward to balancing work and motherhood. “I think that women should have a great balance in life. I think that we should be able to focus on our careers and also be able to be a good wife and be a good mother. I think we can do both. There are many women out there who believe that,” she said. “I want to be able to have it all. I want to say, ‘I’m a mother and a wife,’ and I want to be a businesswoman as well.”