The teenage son of former supermodel Stephanie Seymour has come out after seemingly inappropriate photos of him and his mom surfaced online. 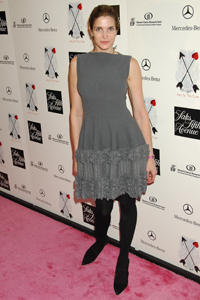 Stephanie Seymour and son Peter Brant II were snapped embracing on the beach several days ago, kissing on the lips — and it appears the teen is copping a feel on his mom’s bodacious bosom!

But Peter says there is absolutely nothing gross going on — and to prove it, he says he doesn’t even like girls.

“I would just like to say that these pictures have been taken completely out of context, my mother and I are very close as she is with all her children. She often hugs and kisses me and my siblings in a manner that is intimate, any mother in the world does the same. That day on the beach we walked around with each other completely aware of the presence of photographers there. We have nothing to hide and with that in mind I would like to say that I am openly gay. At my age my mother and I are almost like friends and I feel open to talk to her about anything (and yes our relationship may be different because of my sexuality).”

When contacted by Gawker about the series of seemingly grody shots, Peter said, “We learn to accept that these photos may appear in the media but we do not appreciate speculation on our personal lives and any other hateful uninhibited opinions.”