Rooney Mara showed off a dramatic look at the Palm Springs International Film Festival Awards Gala in preparation for her role as Lisbeth Salander in the movie The Girl With the Dragon Tattoo. 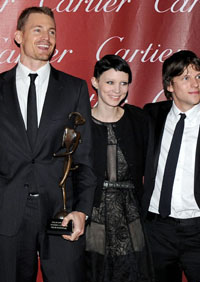 Rooney Mara, who recently appeared in The Social Network, sported noticeably shorter and darker hair with dark make-up and an eyebrow piercing at the Film Festival Awards Gala on Saturday.

The 25-year-old is currently filming the American version of the movie, The Girl With the Dragon Tattoo, which was adapted from the book written by Stieg Larsson. The Girl With the Dragon Tattoo movie franchise was a huge hit in Sweden, and the American version is set to hit theaters December 21, 2011, with director David Fincher.

Rooney Mara, who also starred in the re-make of A Nightmare on Elm Street, reportedly beat out actresses Kristen Stewart, Scarlett Johansson and Natalie Portman for the role of Lisbeth Salander. Fincher had said he wanted to cast a relative unknown for the part.

James Bond actor Daniel Craig also stars in the movie as journalist Mikael Blomkvist and both actors are signed on for the film’s two sequels, The Girl Who Played With Fire and The Girl Who Kicked the Hornet’s Nest.

Read on for more Girl with the Dragon Tattoo