Kanye West and Jay-Z are set to drop their first single, called H.A.M., off of their collaborative Watch the Throne album. 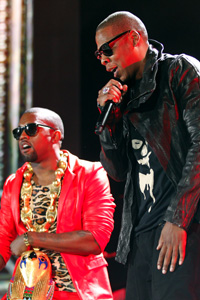 Kanye West and Jay-Z have debuted their first single H.A.M. off of their highly anticipated album Watch the Throne. Kanye initially told the New Year’s Eve crowd that the album was dropping that week but it never happened.

The dynamic duo instead chose January 11 as the official drop date for their single, however, the album is now slated for release in March.

What does H.A.M. stand for? It reportedly is an acronym for “hard as a mother (expletive).”

With expletives peppered throughout the song, be prepared for some serious radio edits. The song reportedly touches on two big events in Jay-Z’s life: The death of his nephew and uncle.

What do the critics think of the song? “Jay-Z made the song. His verse was electric, but it seemed like Kanye didn’t take the verse as seriously,” said radio programmer Flexx, of Washington, D.C.’s WPGC. “He seemed like he was playing around.”