Vince Vaughn is loving being a first-time father, saying his daughter gives him a “different purpose.” 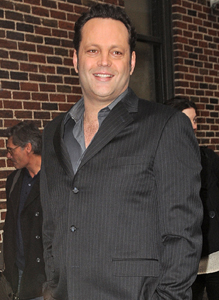 Vince Vaughn became a first-time dad three weeks ago when his wife Kyla Weber gave birth to their daughter. Now the star of The Dilemma says his life has already done a complete 180.

“It gives you a different purpose,” Vaughn told the Canadian Entertainment Tonight.

“I’ll tell you. When Kyla and I had the first pediatrician appointment, we gotta get the car seat and put it in the back of the car. Kyla buckled up and I got in the car. And I was like, ‘We’re a family.’ We’re going to an appointment as a family. It’s just a great feeling.”

The actor also learned a lesson in gratitude. “I feel so grateful,” he said. “You know, my wife’s so great. But I gotta tell you. Just the minute they come out, so beautiful and just so sweet — I was just so glad that everyone was healthy.

So what does the future hold for little Locklyn Kyla Vaughn? Dad will let her decide.

“My thing is getting ahead of myself and worrying about stuff. She’s only three weeks old, right?! People are like, ‘Where is she going to college?’ I didn’t even know she wanted to go to college!”

Locklyn was born in December; Vince and Kyla wed last January outside of Chicago.