Dr. Conrad Murray has been ordered to stand trial on manslaughter charges in the death of Michael Jackson. 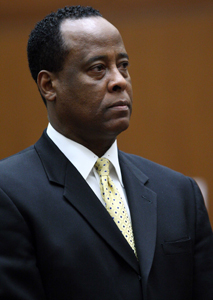 After a six-day preliminary hearing that included over 20 witnesses, Dr. Conrad Murray has been ordered to stand trial on manslaughter charges in the death of Michael Jackson.

Murray was Jackson’s personal doctor and has admitted to giving the star a cocktail of drugs to help him sleep, including the powerful anesthetic Propofol — normally given only in a hospital setting.

Murray claims Jackson gave himself the fatal dose of the drug while the doc was in the bathroom, but witnesses in the house, including Jackson’s security staff and personal chef, all say the doctor was more concerned with covering up evidence of drug use than reviving the singer.

“We are disappointed but not surprised,” Conrad Murray’s lawyer, Ed Chernoff, told TMZ. “We knew we would be in trial and that’s where we’re going to end up.”

One key piece of evidence is the timing of the 911 call, which came at least 25 minutes after Murray found Jackson’s lifeless body, according to witness statements. Murray also administered CPR incorrectly, ordered the security team to hide bottles that authorities believe contained Propofol, and lied to the hospital, the coroner and cops about what drugs he gave the star.

Conrad Murray’s defense team says they believe Jackson administered the fatal dose himself when he woke up while Murray was in the bathroom. The doc also claims Jackson pressured him into giving him the drug, saying he would have to cancel rehearsal for his upcoming world tour if he didn’t get some sleep.

In addition to the order to stand trial, the judge suspended Murray’s medical license. He is currently free on bail. If convicted, the doctor faces up to four years in prison.