James Bond is back! The 23rd James Bond film will go into production late this year for a November 2012 release! Here’s hoping that those doomsday reports about 2012 aren’t true. The world can end after we see Daniel Craig in hot pants again. At least I’d die happy. 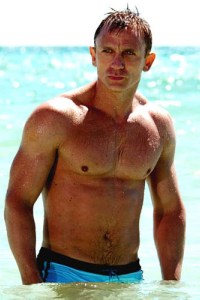 After the financial problems at MGM indefinitely postponed the next Bond film, Daniel Craig and director Sam Mendes showed their loyalty to the franchise by promising to wait until it was all a go. Well, thank the God of martinis they did! Michael G. Wilson and Barbara Broccoli of EON Productions, and the top brass at MGM today announced that the 23rd James Bond film will have a worldwide release on November 9, 2012.

Yes, Daniel Craig will be back as everyone’s favorite spy and Sam Mendes will direct. (He was originally on board, but when things went south, he was downgraded to consultant.) The new Bond script, written by Neal Purvis, Robert Wade and John Logan is being kept under wraps, but personally I’d be surprised if it doesn’t complete what appeared to be a trilogy in the making.

So, the obvious next questions are — who will be the next villain and Bond girl? Will we see the return of Camille (Olga Kurylenko)? Who would you guys like to see? I’m so glad we’re past the days of Denise Richards playing a nuclear physicist. As far as villains go, Deadline reports that producer Broccoli has been to see Russell Beale in his West End play a number of times. I’m putting in a personal request for Christoph Waltz. He screams Bond baddie. Let us know if you agree. Sound off below.