Rachel Zoe has been tight-lipped about her pregnancy but recently the bananas stylist accidently let it slip she’s having a boy! 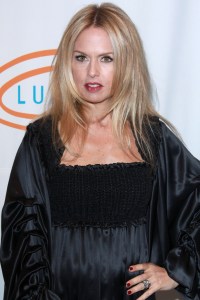 Ah-mazing! Looks like Rachel Zoe won’t be draping a little girl with Chanel after all. The stylist to the stars recently let it slip that she and husband Rodger Berman are expecting a boy!

During an interview with Women’s Wear Daily, Rachel Zoe reportedly addressed her baby bump as a “he” and said, “It all depends on his arrival.”

The interview then went on to include that Rodger Berman sweetly kissed her stomach and beamed, “It’s a little boy.”

Rachel Zoe is seven months along and trying to cut back her responsibilities, but it’s not easy. The Bravo personality will not be missing the Oscars — she’ll be performing red carpet magic while in the end stages of her pregnancy.

“I’ve been asked to slow down,” she told Women’s Wear Daily. “But to be totally honest, it’s kind of next to impossible when you’re planning your show and launching your collection, and in the middle of award season.”

This is going to be bananas! Rachel Zoe raising a little baby boy! Congratulations go out to Rachel Zoe and Rodger Berman! Hopefully we’ll get a look at baby life with Rachel Zoe in the near future.