Michael Douglas sat down with Matt Lauer to discuss his treatment and recovery from cancer — and the actor says all signs point to a full recovery! 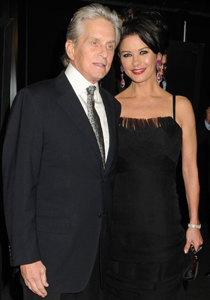 Actor Michael Douglas has been fighting throat cancer since the summer of 2010, when it was announced his illness had progressed to an advanced stage IV. But now after months of treatment, including a dramatic weight loss that caused many to question if he would live or die, Douglas says he’s kicked his cancer to the curb.

“The tumor is gone,” Douglas said in the Today show interview. “But, you know, I have to check out on a monthly basis now to maintain.”

“I think the odds are with the tumor gone and what I know about this particular type of cancer [is] that I’ve got it beat.”

Every cloud has a silver lining, and for Michael Douglas his illness taught him how valuable his loved ones really are.

“All of a sudden the affection from my family, from my friends, and from my fans hit me at a much deeper level than I would have ever imagined before,” he told Lauer. “And it gave me a really new appreciation of just how valuable, how precious good friends are and family.”

“There’s a much deeper feeling,” he continues. “And I’ve talked to other cancer survivors about this, that — that happens, that you just really, really appreciate what’s important in life.”

Michael Douglas has been married to Catherine Zeta-Jones since 2000. They have two children together, as well as an older son by Douglas’ first wife Diandra: Cameron, who is spending five years in a federal prison on drug trafficking charges.