We’re two episodes into The Bachelor take two with Brad Womack and we’re already sick of hearing about his past issues. That didn’t stop us from tuning in to see the girls move into their glamorous new digs while Train serenaded Womack and Jackie during a one-on-one date!

And then there were 20. Okay, that’s a lot of girls left on The Bachelor for Brad Womack 2.0 to choose from and we’re a long way from calling the finale. The show’s second episode of what promises to be a painstakingly long season, featured the lovely ladies checking out their new digs and our changed bachelor beginning his elimination process with one-on-one dates. Womack did have a little help from the band Train — no you didn’t hear wrong. Just read on, it will all make sense soon enough. 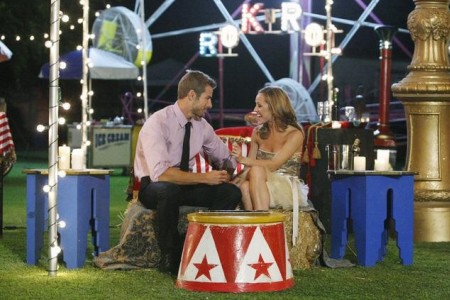 The Bachelor: How the dates went down

So, here’s how Brad Womack broke down the women’s dates this week. Two lucky women got one-on-one dates with the hunky Womack while 15 others competed in the dreaded group date that consisted of a PSA for the American Red Cross. The other three, well, they got zilch.

Ashley H. was chosen to take a trip down a path to start her one-on-one date with Brad. The path led to a mysteriously dark area that eventually transformed into a whimsical carnival with the switch of a light — thank goodness, it was beginning to look a little creepy. As the two ran around like kids, Ashley opened up about her daddy issues and Womack opened up about his own problems. Cue the romantic kiss atop the ferris wheel. Wow, who saw that coming?

The first one-on-one date was interesting, but not really entertaining. We hoped for some excitement in the group date with Chantal, Madison, Melissa, Kimberly, Marissa, Raichel, Britt, Meghan, Emily, Stacey, Alli, Shawntel, Michelle and Lisa — and we got it. It started with Michelle’s distain over sharing her 30th birthday, and Brad, with the other women. The girls were greeted with a fantastic date — PSAs for the American Red Cross. They were tasked to remind America to donate blood and partake in January’s National Blood Donor Month.

It was supposed to be a feel-good date but jealousy erupted when Brad laid sweet kisses on a few ladies and some felt left out. Michelle flipped out over Brad’s racy scene with a few girls but she still pulled a group date rose out of her hat and taunted the others with it. If you were wondering what happened to Sarah P., Ashley S. and Lindsay, it’s easy, they weren’t invited to any of the dates. 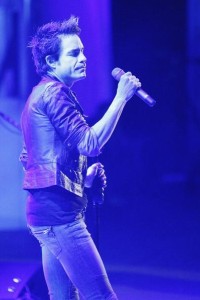 Jackie got the coolest one-on-one date by far because of one word — Train! Brad and Jackie headed to the Hollywood Bowl for a private dinner where Jackie revealed her cautious dating record and our reformed bachelor couldn’t fault her as he was there at one point.

Out of nowhere, the lights changed and Train serenaded the couple as they danced to some beats and showed off their fun side. They slowed it down with a little Marry Me, while sharing an intimate kiss. They are by far my favorite couple at this point! There’s no question, she got a rose.

The Bachelor: The rose ceremony

After some drama boiled over between Melissa and Raichel at the cocktail party, Brad tried to play the hero for both but it just looked awkward.

Ali Fedotowsky and Roberto Martinez showed up on to assess the new season and find out who’s on the up-and-up. Ali and Roberto grilled each of the girls and chose Emily as their pick to receive a rose before the ceremony begins.

Someone always has to go home, but in this case it wasn’t just one person, it was three. Keltie, Michelle and Raichel came up short.