The first round of guests for Piers Morgan Tonight has been announced and it is an impressive group. Piers Morgan will kick off his new hour-long interview show by grilling Oprah Winfrey and then follow up with Howard Stern, Condoleezza Rice, Ricky Gervais and George Clooney. 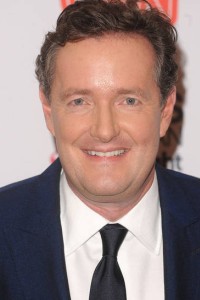 Piers Morgan has taken Larry King’s proverbial chair at CNN, but be warned: Piers Morgan Tonight will be a whole new game. Fans who know Morgan from America’s Got Talent will not be surprised to hear the Brit plays hardball with his interviewees.

“He is a tough cookie!” Winfrey told SheKnows. “Those days of Larry King soft-balling you? Over, baby. I had to take a hot bath and a couple Anacin after that interview. It was like volleying. I said, ‘Piers, if I ask a question and they don’t want to answer it, I move on. You come back three different ways!’ You have to be on your toes.

“At the end of the interview, he asked me, ‘What did you think?’ I was so stunned I just said, ‘Surprising.’ He’s going to be so interesting.”