Lindsay Lohan is out of rehab and back in the game! Her first public outing was at the Lakers versus Knicks battle at Los Angeles’ Staples Center. Lohan was all smiles and ready for her close up. 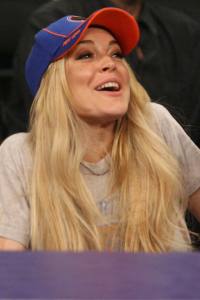 Lindsay Lohan graduated from her stint at the Betty Ford Clinic on January 3, but took a week to herself before hitting the town. Her first big outing was the January 9 LA-NY basketball court showdown and from the pics, Lohan looked thrilled over her freedom.

The Lakers won the night, but to Kobe Bryant’s horror, Lohan was sitting courtside in a Knicks baseball cap!

When ex-girlfriend Samantha Ronson tweeted that the Knicks seemed to be jet lagging on the court, Lilo tweeted her support, insisting, “They played well though :)”

While Lohan is clearly thrilled to be out of rehab, she’s not out of hot water. She could be facing battery charges for her alleged December 12 assault of former Betty Ford staffer Dawn Holland, depending on what the Riverside County Sheriff’s Department decides.

If charged and found guilty, the assault would clearly be a violation of Lohan’s parole. If Lohan isn’t charged, she’ll still have to keep her nose clean — literally and figuratively — until her February 25 court date. L.A. Superior Court Judge Elden Fox has made it clear he’d have no qualms with sending the Mean Girls star back to jail for 180 days.

Congrats on the rehab Lindsay Lohan! Good luck taking it one day at a time.