Who would have thought that Nine Inch Nails frontman Trent Reznor would evolve into a stellar film composer? Hey, I’ve been a fan since the beginning, but songs like Closer don’t exactly go with movie background music. But, after his score for The Social Network got some serious notice, he’s in the running for an award against the great composer Alan Menken! Now Reznor will be writing the score for the upcoming, seriously hyped film, The Girl With the Dragon Tattoo. How times have changed!

Trent Reznor has gotten critical acclaim for his The Social Network score with longtime songwriting partner Atticus Ross. Who knew years ago that Nine Inch Nails’ Trent Reznor would be where he is today? The score was phenomenal and it would be surprising if he doesn’t get award nominations all award season. 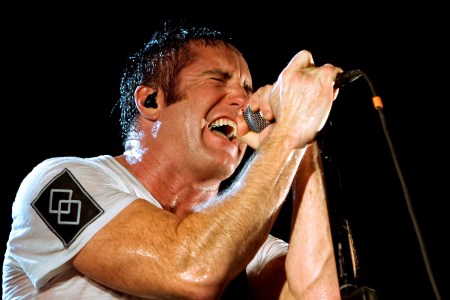 Well, in an interview with The New York Times “TimeTalks” series, Reznor broke the news that he and Ross would be scoring the upcoming American film version of the much hyped Steig Larsson novel, The Girl With the Dragon Tattoo. In the interview, Reznor stated that the score would focus more on string arrangements than The Social Network‘s electronic score.

“We started recording things in a different way that was all based on performance — nothing programmed,” says Reznor. “That would be my limited skills with stringed instruments. We’d process them in a way that really gave it an interesting, organic feel that felt like something we’ve never done before.”

Reznor also has the album How to Destroy Angels on the horizon with Ross and wife Mariqueen Maandig. David Fincher’s The Girl With the Dragon Tattoo stars Rooney Mara and Daniel Craig and will hit theaters this Christmas.