Multiple sources are reporting that Khloe Kardashian is pregnant for real this time. If true, this will be the first baby for Khloe and her husband Lamar Odom. 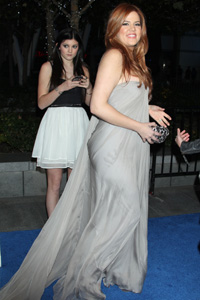 The Khloe Kardashian pregnancy rumor has been circulating ever since the reality star married Lamar Odom — but sources insist that this time it is for real.

Khloe Kardashian was quoted in Life & Style magazine talking about how getting pregnant is “much harder” than she thought. “I thought I’d be pregnant by now. We’ve been working at it all year,” she said. “Getting pregnant is much harder than we thought — but practicing making babies is amazing!”

The magazine reports that Khloe started using a fertility monitor so she will know when she is ovulating. “Lamar is very serious about it.”

Khloe and Lamar are getting their own spinoff reality show, which would make perfect timing if the couple is expecting their first child together. Khloe’s rep has not commented on the pregnancy rumors.

If the pregnancy rumors are true, this will be the first child for the couple, however, Lamar does have children from a previous relationship.

Check out the photo above and tell us if you think the Khloe Kardashian pregnancy rumors are true!

read on for more khloe kardashian