While fans anxiously wait to get their hands on Lady Gaga’s single, Born This Way, an entertainment icon is already staking claim to performing it — Glee! Glee is preparing for a cover of Born This Way that will leave us speechless! 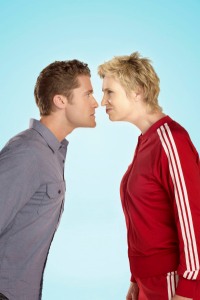 “I love that that song is [an] anthem,” Ryan Murphy explained. “This show is by nature optimistic and I think a character like Karofsky could turn to booze or pills or alcohol and kill themselves or do something dark. But I also love Max and I love that character and I sorta want that character to have a happy ending. So I don’t really know what that’s going to be, but I do know we’re going to do a whole episode that’s about that song.”

Do we smell a Karofsky taken under Kurt Hummel’s wing story developing? Maybe, maybe not. One thing is for sure, fans will go gaga over Glee’s version of Lady Gaga’s newest track that hasn’t even hit airwaves yet.

The episode featuring Lady Gaga’s Born This Way is slated to air sometime in March or April, which is perfect timing for the release of the singer’s single in February, and album of the same name in May.

Are you excited to see what Ryan Murphy cooks up for his cast of Glee and Lady Gaga’s single Born This Way? We are!