After all the hubbub that was generated from Katie Holmes tackling the exquisite Jackie Onassis, it was all for nothing. The History Channel miniseries starring Katie Holmes, The Kennedys, won’t be airing.

Related story EXCLUSIVE: Katie Holmes and Emilio Vitolo Jr. Have Been Dating for Longer Than You Think 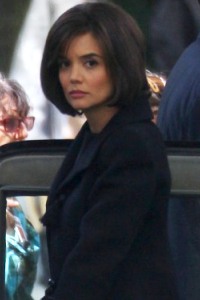 A&E has decided to pull The Kennedys, an eight-part miniseries starring Katie Holmes as Jackie Onassis and Greg Kinnear as John F. Kennedy, from the History Channel’s line-up.

Muse Entertainment and Asylum Entertainment, who co-produced The Kennedys, released the following statement: “We are proud of the work all of our talent put into the making of The Kennedys and the painstaking efforts that went into creating a drama that is compelling while rich in historic detail.”

This means fans will obviously miss out on the opportunity to see Katie Holmes transform beautifully into the famous First Lady — at least not on the History Channel. The statement went on to say: “Although we regret this does not fit into the History Channel’s plans, we are confident that television viewers in the United States will join viewers from around the world in having an opportunity to watch this series in the near future.”

Reports are saying that Katie Holmes might get her day after all because The Kennedys is currently being considered for airing by Showtime.

What do you think of the History Channel’s decision to cancel plans to air The Kennedys? From the looks of Katie Holmes in classic Jackie O wear, it would have been an interesting role to see her play. Who knows? We may get the chance in the future.