David and Victoria Beckham are well on their way to their own soccer team as the couple prepares for baby number four — Victoria is pregnant! 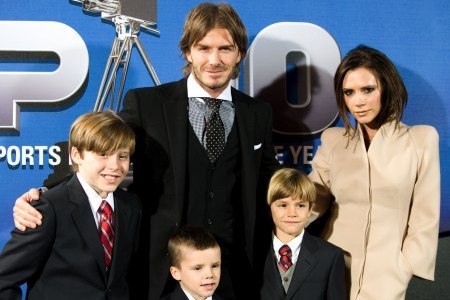 Jo Milloy added of David and Victoria’s current children, “[Sons] Brooklyn, Romeo and Cruz are very excited about the arrival of their new brother or sister.”

David Beckham and Victoria Beckham are proving they are in it to win it when it comes to their marriage of 11 years. With three children and one on the way, it appears they are still as madly in love as ever.

“We were at a party the other day at my mum’s house and I was sitting on his lap. We’re very affectionate,” Victoria revealed to Marie Claire recently. “And I looked at him and thought after being married for 11 years — we were the only couple who were even near each other at that party. We’re soulmates.”

There is no doubt this new little summer baby will be just as cute as his or her siblings! The soccer stud and his posh spice wife produce some adorable children.

Congratulations go out to David and Victoria Beckham on the news of a new addition to their growing family!