Actress Ahna O’Reilly is doing her best to squash the James Franco gay rumors. Is he or isn’t he? Read on. 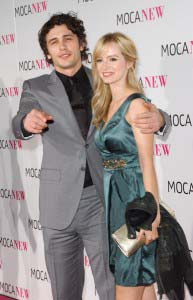 Actress Ahna O’Reilly is confident that James Franco is straight. And she should know – O’Reilly has been dating the 32-year-old for quite awhile.

“If he does, it’s news to me!” O’Reilly replied when asked if Franco wants to be gay.

Franco did his best to stir the pot when asked by Entertainment Weekly why everyone is questioning his sexuality. The prolific actor, artist, student and author has played gay men in three films – Milk, Howl and the upcoming The Broken Tower. He’s also in talks to bring the story of gay Rebel Without a Cause actor Sal Mineo to the big screen.

“It’s funny because the way that kind of stuff is talked about on blogs is so black-and-white,” Franco told EW. “It’s all cut-and-dry identity politics. ‘Is he straight or is he gay?’ Or, ‘This is your third gay movie — come out already!’ And all based on, gay or straight, based on the idea that your object of affection decides your sexuality.”

He goes on to say that the reason he plays so many gay men is because they’re simply fantastic roles.

“There are lots of other reasons to be interested in gay characters than wanting myself to go out and have sex with guys,” he explained. “I mean, I’ve played a gay man who’s living in the ’60s and ’70s, a gay man who we depicted in the ’50s, and one being in the ’20s. “And those were all periods when to be gay, at least being gay in public, was much more difficult. Part of what I’m interested in is how these people who were living anti-normative lifestyles contended with opposition.”

But why should he stop the fun now by squelching the rumors? After all, it’s fun to keep everyone guessing.

Ahna O’Reilly is one lucky gal to snag someone as entertaining as James Franco.

Read on for more on James Franco