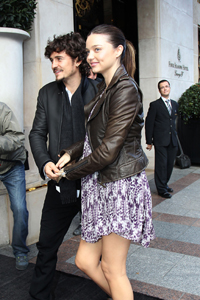 This is the first child for Bloom, 33, and Kerr, 27. The couple has been together for three years and married this July.

Reports are saying that the Pirates of the Caribbean star has been bragging about “his son.” They say the baby was delivered in a hospital in LA and Kerr’s parents paid their new grandson a visit around 8 pm last night. No word yet on the name of baby boy Bloom.

Miranda Kerr announced her pregnancy in September, but confessed to Spanish Vogue she had a hard time keeping it quiet. “I remember on one occasion in the early days (of my pregnancy) when it was still too soon to say anything and I had a dreadful time at one job,” she said.

Kerr is excited to be a working mom — and plans on continuing to model after baby is born. “I think having children and pregnancy is a part of life, I look at how models like Heidi Klum, Adriana Lima and Alessandra Ambrosio have done it and made it a part of their lives.”

Stay tuned for the announcement of the baby name!