Natalie Portman showed off her baby bump and amazing engagement ring during the 2011 People’s Choice Awards in Los Angeles. 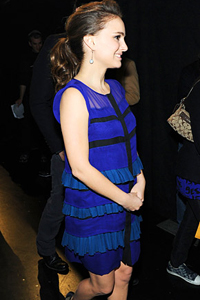 Natalie Portman looked amazing at the People’s Choice Awards — and she revealed her baby bump and fabulous engagement ring.

Black Swan actress Natalie Portman has a lot of life changes coming up this year — including a baby and an engagement! Portman, who recently announced her engagement (and pregnancy) to Benjamin Millepied, showed off her baby bump at the People’s Choice Awards on Wednesday night in a blue Jason Wu shift dress and mesh Dior pumps. She is reportedly about three months pregnant.

She also debuted her beautiful engagement ring at the awards show, as seen in this up-close picture from Us Magazine. Her fiance, Millepied, was not with her at the People’s Choice Awards.

Natalie Portman and Millepied met on the set of Black Swan, where he choreographed some of the ballet and appeared in the movie. “It was seductive to watch them. There was no way the attraction could be missed. I don’t think he could help himself — she’s dazzling!” a source reports. 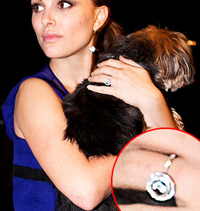 The source also admits that Portman, 29, was surprised to find out she was pregnant.

“The pregnancy was a bit of a shock,” the insider reveals. “He proposed after they found out. They are happy, and all is right.”

read on for more natalie portman