Reports are saying that John Edwards is engaged to his former mistress, Rielle Hunter.

John Edwards may be engaged to Rielle Hunter, only three weeks after the death of his wife Elizabeth Edwards, says the National Enquirer. 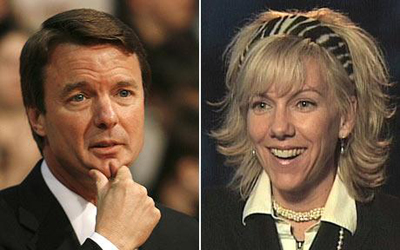 Normally, I don’t hold much stock in what the National Enquirer says — but they broke the story of the affair between Edwards and Hunter so they might have the inside scoop on Edwards.

Edwards met Hunter when she was hired during his 2008 presidential campaign to produce web videos. They reportedly started an affair shortly after meeting — while Edwards’ wife, Elizabeth, was battling cancer. Edwards fathered a daughter with Hunter, although he initially denied it.

Sources are saying that Edwards introduced his three children with Elizabeth to Rielle and his baby daughter over the holidays, hoping they would “become one, big happy family.” The reported wedding will happen this summer.

Elizabeth Edwards passed away last month from cancer. She left John out of her will, leaving all possessions to her three children.

An Edwards family spokesman is denying the report, saying it is “not true.”

Read on for more John Edwards

John Edwards is on our top cheaters list of 2009
Unlike John Edwards’ wife, why celebrity wives stay with their husbands
A clip featuring John Edwards’ mistress