LeAnn Rimes is sporting an $85,000 engagement ring while the ex-wife of her fiance is struggling to keep a roof over their kids’ heads. 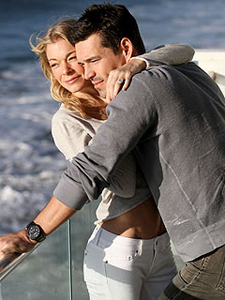 LeAnn Rimes has been eagerly showing off her gigantic, $85,000 engagement ring at the same time Eddie Cibrian’s child support payments to his ex-wife have been slashed.

The former CSI: Miami actor cried poverty to the courts, saying he hasn’t worked in six months, and got his child support payments reduced to the point that his ex Brandi Glanville has to give back money from their divorce settlement and find a new home — after just getting their kids settled in six months ago.

“Look, I don’t mind that he got her a ring but the timing wasn’t obviously the best and the truth is the communication is not great right now,” Brandi told RadarOnline.com.

“I just want to get on with my life and to move forward but it is really tough at times because everything has been so very public.”

Dual cheaters LeAnn and Eddie got engaged in December and promptly rubbed Brandi’s nose in it by posting photos of themselves cuddling on the beach and showing off LeAnn’s five-carat oval diamond. She made sure to flash it again when the pair went through security at LAX on their way to a lavish beach vacation in Mexico (where LeAnn also showed off her new boobs).

Back in LA, Cibrian rolls around town in a Porsche and is shacked up in a Calabasas mansion.

Of course, that’s all paid for with LeAnn’s cash. And none of it helps Eddie’s kids, who now have to get used to their third home in less than a year.