The second part of the second season of MTV’s Jersey Shore premieres — and the whole gang is back in Seaside Heights, New Jersey, including Snooki and The Situation. Fist pump!

“We are going to top last summer,” says Pauly D — and from the looks of it, they did! The third season of Jersey Shore has the entire crew back — Pauly D, Snooki, Vinny, Sammi, Ronnie, Mike “The Situation” Sorrentino and Jenni “JWoww” Farley — with the exception of Angelina. In her place, is the “short little meatball” named Deena, who is a friend of Jersey Shore breakout star Snooki. 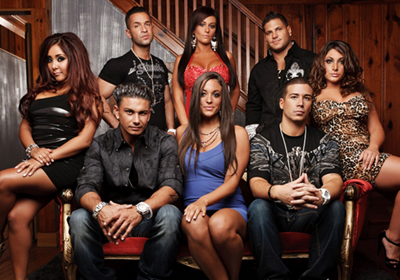 It takes no time at all before Deena is seen stripping down in front of The Situation — which means she fits right in at the Jersey Shore.

Sammi and Ronnie were on-again and off-again all last season — will their relationship survive another summer at the Jersey Shore? After learning that Ronnie cheated on her (thanks to the anonymous letter written by JWoww and Snooki), can she trust him again? The end of last season showed bad blood remained between Sammi and JWoww. I smell a cat fight brewing!

Pauly D and Vinny wrestled back their “creepin” in season two, but The Situation continued to make his rounds with the ladies — regardless if they were grenades or not! Will the guidos of Jersey Shore make the rounds of Seaside Heights or will they pick one special guidette to spend the summer with?

Watch the season premiere of Jersey Shore on MTV tonight for plenty of cat fights, guidos, guidettes, GTL, grenades and creepin’ — and if you have no idea what I’m talking about, you better tune in to find out!

read on For more on Jersey Shore