He’s hot, he’s dating Kristen Stewart, he’s got a string of hit films and now Twilight star Robert Pattinson is the brand new owner of a bunch of People’s Choice Awards and a plum movie role. 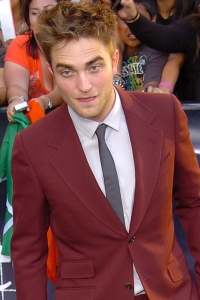 Last night at the Nokia Theater in Downtown Los Angeles, the People’s Choice Awards handed everyone’s favorite vampire a whole bunch of glass statues. Well, for the film anyway. The Twilight Saga: Eclipse won for Favorite Movie and Favorite Drama Movie. Stars Kristen Stewart, Taylor Lautner and Robert Pattinson won for Favorite On Screen Team. Though he lost to Zac Efron for Favorite Movie Star Under 25, Pattinson will certainly have something shiny for his mantel.

The three stars were teased by host Queen Latifah at the awards last night after showing up at the very last second. Certainly understandable. They’re busy shooting Breaking Dawn down in Louisiana. But wait…not enough Rob news for you? Well, right before the ceremony, the news broke that Rob has landed the first major role in David Cronenberg’s Cosmopolis.

The film is an adaptation of the Don DeLillo novel about financial wunderkind Eric Packer whose financial risk puts him in the crosshairs for assassination. Oh, and he’s starring with Reese Witherspoon in Water for Elephants. Someone hit this boy with the lucky stick, didn’t they?

So what do you think? Is Rob just too cute to ever be overexposed? Or are you tired of seeing his face? Let us know below.