The Seattle Grace docs haven’t quite recovered from last year’s shootout yet, but tonight on Grey’s Anatomy, they have to step up to help new victims when a gunman opens fire at a local college. Meanwhile, Teddy gets hitched and Arizona doesn’t get the warm welcome she’d expected. 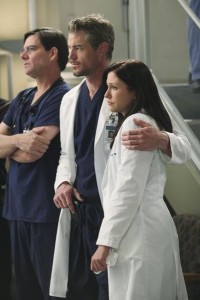 Emotions run high on Grey’s Anatomy when the staff hears about a shootout at a local college. While the docs prepare for an influx of mass casualties, Cristina is actually on the scene. The trauma and mayhem may be just what she needs to finally get her groove back.

The emergency dredges up hard memories for all and almost overshadows Teddy’s [Kim Raver] big news. She marries her patient Henry [Scott Foley] in a quickie ceremony, so she can share her medical insurance. Owen [Kevin McKidd] is sure his pal is making a mistake, but could this faux marriage turn into something more?

With Jessica Capshaw back from maternity leave, Arizona returned to town at the close of the last episode with hopes of rekindling the romance — or at least making amends. Brokenhearted Callie [Sara Ramirez] slammed the door in her face, in spite of having missed her desperately.

Arizona isn’t giving up! She’s waiting outside Callie’s door the next morning, but Callie’s response isn’t any better. She tells her ex-girlfriend to go back to Africa.