In a stunning development, all charges have been dropped against Howard K. Stern in the Anna Nicole Smith drug trial. 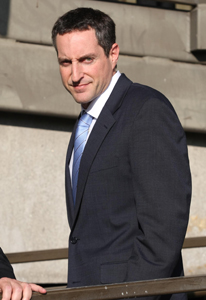 A Los Angeles judge has dropped all charges against Howard K. Stern in a stunning reversal of the attorney’s conviction on fraud and drug conspiracy charges in the Anna Nicole Smith case.

Stern, Anna Nicole Smith’s attorney and closest confidante, was convicted by a jury on two counts of conspiracy. He was at court today for sentencing when the judge threw out the verdict.

The judge felt the conviction was baseless and unlawful, a big time repudiation of the LA County District Attorney and of California Governor and former Attorney General Jerry Brown, who spent millions of dollars of taxpayer money on the case — money that the economically struggling state just could not spare.

The judge also dropped all charges except one against Smith’s psychiatrist, Dr. Khristine Eroshevich, reducing her conviction from a felony to a misdemeanor and giving her a $100 fine and unsupervised probation instead of jail time.

Howard K. Stern had faced a maximum of nearly four years in prison, but the L.A. DA had been expected to ask for only community service — a sign that they too thought the whole spectacle was a joke.

Anna Nicole Smith died of a drug overdose in February 2007. The former Guess model and new mother, who was still grieving the death of her oldest child, was 39.