Jaime Pressly was arrested late last night for a DUI in Santa Monica. The My Name is Earl star committed a traffic violation around 11 p.m. and was pulled over by cops.

Pressly failed a field sobriety test and was arrested and booked at the Santa Monica jail for driving under the influence of alcohol. TMZ is reporting that no drugs were found in the car and there was no car accident. 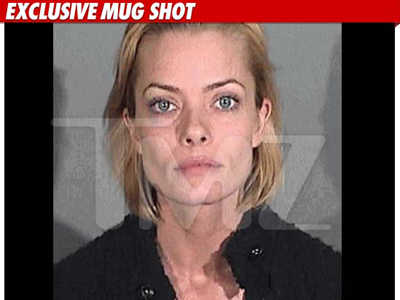 The usual bail amount for a DUI is $5,000, but Pressly’s bail was set higher at $15,000. Many are speculating that a higher blood alcohol level (higher than .15) could be one reason bail would be set higher — but police officers have not confirmed this.

Pressly, 33, has a son named Dezi with her ex-boyfriend Eric Cubiche, however, he was not in the car at the time. She is currently married to an entertainment lawyer, Simran Singh — who will undoubtedly be giving his wife some legal advice.

TMZ was able to obtain this mug shot of Jaime Pressly — and she is looking pretty good, as far as mug shots go!