Khloe Kardashian and Lamar Odom are reportedly getting their own series. It’s a brave new world as there’s a Kardashian spin-off in the works and this time it doesn’t involve the Kardashian sisters taking over some random city. 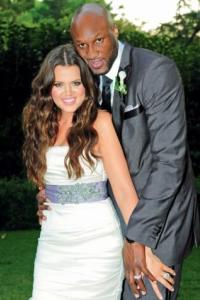 Khloe Kardashian is sticking with her reality roots but this time she’s leaving her sisters behind and teaming up with husband Lamar Odom for their new series. The husband and wife team are tapped to star in a new reality series that is currently called, but could be changed, Khloe & Lamar.

Khloe & Lamar will air on E! and feature Kardashian and Odom as they navigate life and her brother Rob Kardashian as he continues to remain in their home.

Khloe Kardashian originally found reality fame in the E! shows Keeping Up with the Kardashians and Kourtney and Khloe Take Miami. She married Lamar Odom, a basketball star with the Lakers, in September of 2009 after dating for just one month.

E!’s executive vice president Lisa Berger released the following statement: “Khloe and Lamar are such a dynamic couple that we just knew we had to give them their own series.”

She added, “They are funny, dramatic, opinionated, and we intend to capture all this, along with the unvarnished reality of their lives together and apart, since each is constantly followed by their own celebrity spotlight.”

Will you watch Khloe Kardashian and Lamar Odom with the rest of the world in Khloe & Lamar? Tell us we want to know.