The former Betty Ford worker who accused Lindsay Lohan of battery is now backtracking and defending the star. 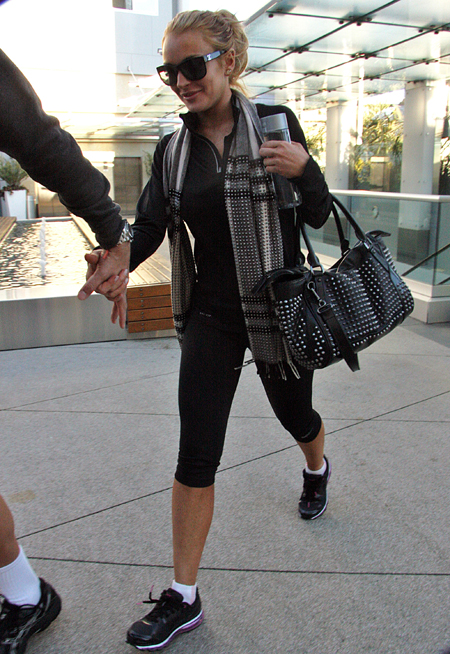 Dawn Holland, the rehab worker at Betty Ford who got Lindsay Lohan into this whole mess that could get her tossed back in jail on a supposed probation violation, is now backing off the statements she was paid for by TMZ.

Holland, who has since been fired from the rehab center, claimed that Lindsay refused a Breathalyzer, threw a phone at her and injured her arm after missing curfew at the sober living house. After a 911 call was made, the Palm Desert Police Department started gunning for Lindsay’s return to jail, even though no arrest was made, no proof that an assault occurred ever turned up and they had jurisdiction in the probation case.

In a dramatic turnaround — probably designed to save her own hide since talking to TMZ was a huge violation of state and federal health privacy laws — Holland now says Lohan didn’t do anything wrong.

In a statement through a rep, Holland recanted. “It is important to note that it was Ms. Lohan, and not Ms. Holland who called 911 on December 12th. Had Ms. Lohan not called 911 — this incident never would’ve been public knowledge, let alone criminally investigated. Ms. Holland has long held that recovery is not always a pretty process and the workings of a recovery center have never been for the faint of heart. As a recovering addict herself, Ms. Holland is proud of Lindsay for making the always difficult voyage toward recovery. Had the interaction between these two ladies occurred in front of a police officer anywhere in this Country, no probation would’ve been violated, no arrests would’ve been made and certainly no criminal charges would have been filed. The recent reports of criminality and probation violations are much adieu [sic] about nothing.”

Holland dropped the battery charges against Lohan when it was discovered TMZ had paid her for Lohan’s patient info and now refuses to assist the police in any future investigation or prosecution. While the LA County Probation Department and the judge could still find Lohan in violation, chances are slim without an arrest or proof she was drinking.

Lohan’s lawyer Shawn Chapman Holley says that won’t be a problem. “I had numerous conversations with Betty Ford counselors and doctors over the course of Lindsay’s treatment there and it was never suggested by anyone that she ever drank or used drugs. Her discharge letter from the facility is totally consistent with that.”