With the holidays behind us, ABC’s Modern Family, Cougar Town, The Middle and Better with You return with Wednesday night laughs while James Marsden and Jami Gertz get into the Modern Family action! 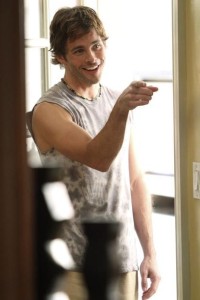 First up at 8, Frankie [Patricia Heaton] and Mike focus on Taking Back the House on The Middle. The drained parents decide it’s time to stop letting the kids push them around and run their lives. They take back the TV, makeover the family room and even get a few friends to hit the town with them. Needless to say, Axl, Sue and Brick don’t roll with the plan.

At 8:30, bodies are changing on Better with You: Better with Skinny Jeans. After Mia’s skinny jeans die, Ben is saddled with the task of telling Mia it’s time to forget about replacing them and hit the maternity stores. Joel faces his own body issues when he learns he ranked last in Vicky’s fantasy husband draft. Maddie, meanwhile, goes overboard while trying to prove her love of the U.S. Postal Service to future brother-in-law Casey.

Then at 9, Modern Family asks the question: Who wouldn’t want to find James Marsden in their hot tub? Cameron and Mitchell are ready to call 911 when they spot a stranger taking a dip in theirs, but once they see how hot he is, they change tunes. The boys jump in the tub to get the dish from their new neighbor Barry [Marsden]… and maybe coo over him just a bit!

Over at the Pritchett house on Modern Family, Claire goes vigilante over her speeding neighbors, while Phil tries to land a big client. Jay is horrified to see that Manny’s new bike has training wheels. When he learns Gloria doesn’t know how to ride either, he decides to teach them. Jami Gertz also guest stars.

At 9:30, Jules and Travis are on cloud nine over their romances on Cougar Town: No Reason to Cry, but things take a turn for Jules [Courteney Cox]. Grayson isn’t crushed by a series of mishaps — including the crash and burn of one of the love doves Jules named after them, so Jules starts to wonder if they’re really a perfect match. Trav’s girl Kirsten, meanwhile, ruffles feathers when she messes with Bobby’s golf game and Andy upsets Ellie when she steals his joke.

Those of you who really did make that healthy resolution may want to stick with ABC at 10 for Primetime: Celebrity Weight Loss — What Really Happens, featuring Ricki Lake on her weight loss success story, Kendra Wilkinson on losing the baby weight and Bethenny Frankel on natural food.