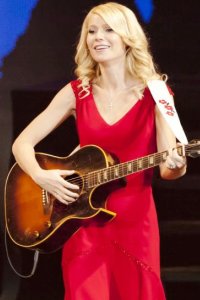 SheKnows asked Gwyneth Paltrow how she does it all and what drew her to Country Strong, the tale of country music singer Kelly Canter, a woman who is her antithesis. Kelly is a person who simply cannot handle the stress of massive fame and relationship chaos in the least.

For our Beverly Hills chat, picture Gwyn dressed casually in a sweater and slacks but accessorized with glam sizzle in big gold bangles and necklace with a huge gold dangle pendant.

Paltrow’s long hair is slicked back into a casual ponytail and she’s sipping on a rather strange-looking green health drink which she assures us is “yummy.”

SheKnows: This is an emotional film about a life out of balance. Is that what drew you to it?
Gwyneth Paltrow: When you make art you want to invest everything that you have. You want to move people. You want to make some kind of an impact. I’m always drawn to emotional material and this was a very emotional piece for me. It was great. It was really cathartic for me to do it, to play someone who was so human and reckless because in my own life I’m so [expletive] organized [laughs].

SheKnows: You and your husband Chris [Martin of Coldplay], Tim McGraw and wife Faith Hill got to know each other well during the making of the film, right?

Gwyneth Paltrow: Yeah, that was really nice. Sometimes you meet “like” people and it’s rare, but it’s wonderful and it happens. Tim’s wife is basically the greatest person on earth, seriously. I’m not kidding. She’s the most generous, patient, kind, like amazing mother, amazing wife, amazing homemaker and then she’s also Faith Hill. But it was great. We all got along really well. We’re all really close.

SheKnows: I know Tim and Faith helped you get into character but did Chris give you any advice for being on stage, what it feels like to him? 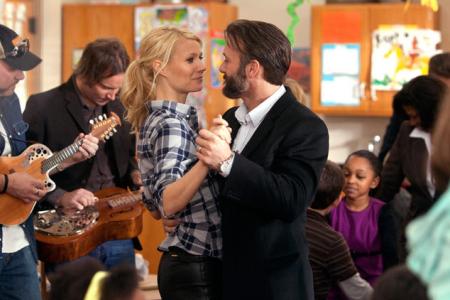 SheKnows: Kelly is falling apart. Which was harder for you to portray, the crying scenes or the drunk ones?

Gwyneth Paltrow: The drunk ones were harder only because I’ve had a lot to cry about, so I’m okay there. But the drunk scenes, I just thought I wanted them to be really real. So I watched a lot of drunk people behave. I went to bars and stuff like that.

SheKnows: [We laugh] You went to bars to watch drunks?

Gwyneth Paltrow: [Laughs]. Yeah. I live in England. It’s not that hard.

SheKnows: How did you divide your time and your focus between acting in the film and working on the singing and performing? Does one get more attention than the other?

Gwyneth Paltrow: Well, I’d say that, before the movie started, all of my attention was on the preparation for the music; voice lessons and guitar, and then once it started and all of the songs had been recorded [it was easier]. But, there were a couple of scenes where I could play guitar live and sing. My first day, in the rehab scene, I was like, “Man, I’ve got to sing a song and play guitar right now.” But once that and the scene with Travis, the little boy, where I also have to sing and play guitar, were done, I’d say that [my focus] was more on acting. 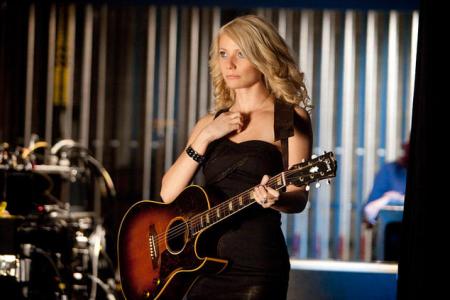 SheKnows: You are married to a rocker. How important is music around your house?

Gwyneth Paltrow: There’s lots of singing, lots of music. My son sings all day long, all day. He’s so funny. And my daughter, her pitch is amazing. She just did her nativity play at school and her voice was so clear. They’re great. They love music and in the car they always want the radio on and they always sing. When Taio Cruz sings Dynamite, that’s her favorite song. It’s so weird to hear a four-year-old sing, like [Gwyn goes into Dynamite mode singing] “I throw my hands up in the air.”

SheKnows: What music are you into right now?

Gwyneth Paltrow: I’m super obsessed with Nicki Minaj, with her record. It’s incredible, and I love Kanye West’s new record. It’s a masterpiece. I’m really into this Dierks Bentley bluegrass record that he made called Up On the Ridge. I have a very wide, schizophrenic taste in music.

SheKnows: You seemed so joyful on your Glee guest appearance. Were you just really stoked to do that?

Gwyneth Paltrow: It was the best. I had so much fun. It was such a great surprise. I didn’t even know what Glee really was. I hadn’t really heard of it. My brother was like, “You have to do it. It’s so great.” So I started watching them all and now I’m a total “Gleek.” I’m obsessed and when I got to set I was kind of star struck. I was like, “Wow. This is so fun.” I had the best time. 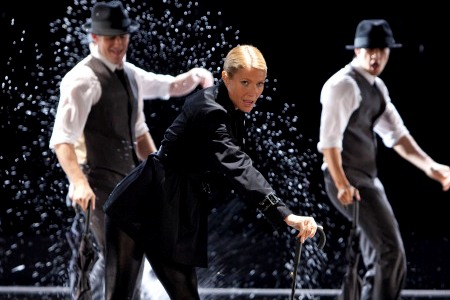 SheKnows: Do you see yourself getting more involved with music now that you’ve been on stage singing and on TV? There has to be a different rush that you get that you don’t have with acting, right?

Gwyneth Paltrow: Yes, there is. I never understood it, obviously, until very recently. But, yes, it’s a big rush. It’s very different because when you’re singing, it’s so you. When you’re acting you’re playing someone else, but when you’re acting and singing a song it’s coming from your soul. There’s no way that it’s not really you. So it’s very vulnerable and scary to sing in front of people. If you do it, when you’re done you’re like, “Wow,” and you feel like you’re on a high. It’s amazing.

SheKnows: Would you want to pursue making music more now?

Gwyneth Paltrow: I don’t know is the answer to that. I don’t know how that would really work with my life. I know that singing and guitar are really a part of my life and I play and sing every day and I may just do it on the floor with my kids or I may make a record. I don’t know yet.

Up next…Gwyneth talks her co-stars including Garrett Hedlund and Leighton Meester!