The superhero drama The Cape premieres January 9 and to promote it, the show is putting capes on 30 statues in Manhattan! If you live in NYC, you can get in on the action and win an iPad…which will give you super powers. Just kidding! 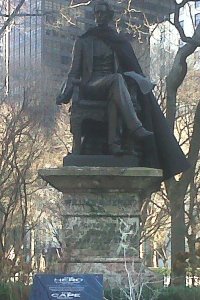 If you’re like me and you love a man in a cape…ahem…walking around Manhattan is going to make you happy. In honor of Sunday’s premiere of the new NBC show, The Cape, 30 famous statues will be draped with a cape. Yes, you could be walking around Central Park and run into a cape-wearing statue of Shakespeare! A stroll through Union Square will reveal the father of our country dressed up like a superhero! But don’t worry. No one is getting in trouble for this little stunt.

NBC has partnered with the New York City Department of Parks and Recreation for this event.

The statues will also have a plaque that details their greatest achievement and their similarities to Vince Faraday, played by David Lyons.

Here are the instructions from NBC: “Visitors to the statues will be able to enter the ‘Hero Behind the Cape’ giveaway via FourSquare and Twitter. By checking in at the location of a statue, tweeting a picture of themselves with the statue with the hashtag #herobehindthecapeswps or by direct messaging the official Twitter handle (www.twitter.com/NBCTheCape), fans can enter themselves into the drawing for the grand prize. One winner will be chosen each day between January 5-9 and receive an Apple iPad. The grand prize winner will receive the full “Hero” treatment in New York City: A luxurious dinner for two, limo service, two tickets to the taping of an NBC audience show and an Apple iPad — an awesome prize.” 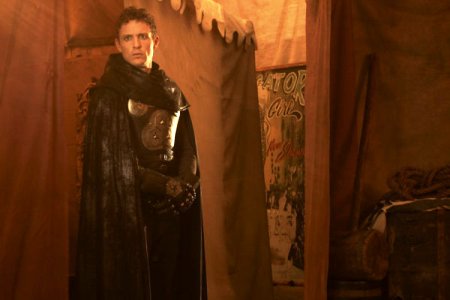 Official rules can be found at www.theherobehindthecape.com. So start tweeting everyone! [Please, also put my Twitter handle, @jennabusch, in there too. I’d love to see your pictures with The Cape!]

The Cape stars David Lyons and Summer Glau and arrives Sunday to give a new take on the superhero genre.