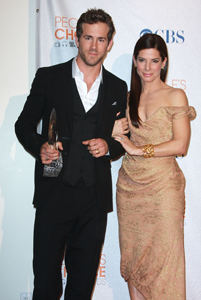 After spending New Year’s Eve together, dancing and laughing with a group of friends, the rumor mill started churning out the story that Ryan Reynolds and Sandra Bullock are dating. But are they a hot couple or a not couple?

The rumors are…false. For now, at least.

Turns out Ryan and Sandra, who starred in the 2009 rom-com The Proposal together, have been good friends for a decade and have spent many a New Year’s Eve partying platonically.

A source close to Ryan says any whispers of a romantic relationship between the two actors “is ridiculous.”

“They have been friends for 10 years and they celebrated New Year’s with others. That’s it. They really are just friends,” the insider told People.

A rep for Bullock confirmed the two celebrated together, and not for the first time. “They all had a great time ringing in the New Year as they have in the past.”

Where did this party go down, anyway? At Bullock’s Austin restaurant, Bess Bistro, where observers confirmed a lack of sparks between the two.

But with both newly single, who knows what this long-standing friendship could blossom into!